We are excited and happy that Venerable Robina Courtin is returning to Yeshe Norbu in March 2020!

Venerable Robina will teach on samsara and nirvana, the two of the most important and perhaps misunderstood terms in Buddhist philosophy.

Venerable Robina will also teach a weekend course on Samsara and Nirvana on March 28 & 29: 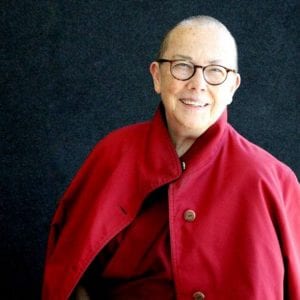 Venerable Robina Courtin, Australian-born Buddhist nun with a powerhouse personality. Her history has been one of extremes – from life as a hippie to self-declared communist to feminist before she was drawn to Buddhism.

Having initially trained as a classical singer she moved to London in 1967, where she lived for four years and became actively involved in the radical left, working mainly with a London-based support group for black and Chicano prisoners. In the early ’70s she became involved in feminist activism and returned to Melbourne in 1972 to work with other radical feminists. In her quest for a spiritual path, Robina also began studying martial arts, first in New York in 1974 and then back in Melbourne in 1976.

Later in 1976 Robina attended a Tibetan Buddhist course in Queensland and in November 1977 she traveled to Kopan Monastery in Kathmandu, Nepal for further studies and became a student of Lama Yeshe. In 1978 she was ordained as a Buddhist nun in Dharamsala, India.

“When I met Buddhism I felt like I had found something I had lost, because, from a karmic point of view, it was something I’d had before, in previous lives. When I heard it again, it was like coming home.”

22feb09:3015:00Event has startedRetreat Day, Refuge in the Three JewelsOne Day Retreat on Discovering Buddhism module 8: Refuge in the three jewels.